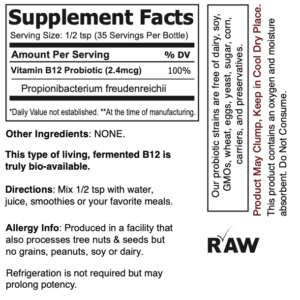 3-PACK of B12 Probiotics

Yep, the doctor is weaning me off of all my meds as we speak, this is happening due to these few products that I have discovered, which has never been seen before on the market.

As you know, I dropped to 96 pounds and almost died and these products literally saved my life.

This is good for everyone…

Get ready, because these new products which have never been seen before is going to start an entire new industry!  First I will carry it at the highest potency that can never be reproduced, and then you’ll start to see the natural doctors will start to talk about it, and then everyone will have a watered down version of it with fillers.  I go directly to the source and add nothing to the ingredients.

The first product is a probiotic called Propionibacterium freudenreichii…

I know that this is going to sound absolutely crazy, but for every gram you take, you get 1.5 micrograms of  living B12.  It’s a living probiotic, which is in its balanced fermented form, making it more bioavailable compared to any B12 on the market!  The Recommended Dietary Allowance (RDA) is 2.4 mcg/day

So… you can literally take 1.6 grams of this probiotic powder per day, and get the full recommended dietary allowance of your B12 needs, in the most absorbable form of B12 on the market.

I had pernicious anemia, and it saved my life…

This product is a miracle…

When I almost died at 96 pounds, afterwards I couldn’t walk more than 10 feet without shortness of breath due to having pernicious anemia…

Pernicious anemia happens when you have a lack of intrinsic factor, which needs to bind to Vitamin B12 for its absorption.  Whether you are on a vegan diet or not, this is incredibly important.  But if you are vegan, you should REALLY take this…. Trust me…. Now I walk a minimum of 5.2 miles per day!

The B12 patches didn’t work…. I put them behind my ear, my neck, and even on my belly where my colon was.

I was talking to a chemist who told me that people don’t need 10,000% of all those b-12s on the market today. Most of that goes right out in urine.

This type of b12 is in it’s balanced fermented form, making it truly bio-available.

The B-12 is human active Hydroxocobalamin, and this is unheard of…

This probiotic has GRAS (Generally Recognized as Safe) status granted by the FDA, and QPS granted by EFSA allowing for it’s direct use in fortifying food and feed preparations with B12, because it is is an efficient and only known producer, reaching cobalamin levels of 15 µg/mL, which can be seen at the clinical study here:

It also states in the clinical study above:

Due to the complexity and cost of the chemical synthesis of cobalamin, which requires approximately 70 steps, its industrial production is exclusively through microbial fermentation, most commonly by Propionibacterium freudenreichii [3].

In the above link it also says that The complete biosynthesis of cobalamin requires approximately 30 gene products [3], but it is the final steps of the pathway, namely production, activation and attachment of the lower ligand that decide whether the final product will be an active vitamin B12 or an analog.

It was shown that the consumption of this bacterium modulates the gut microbiota, which makes P. freudenreichii  both a probiotic and a prebiotic (R).

P. freudenreichii  was effective in the treatment of mild to moderate ulcerative colitis in a human pilot study (R).

A component from P. freudenreichii  suppresses the production of proinflammatory cytokines and attenuates colitis in mice (R).

3) P. freudenreichii  May be Beneficial in IBD

P. freudenreichii  accelerates the healing in rats with colitis (R,R).

These two clinical studies show that this probiotic has shown good constitutional survival under digestive stress and their ability to survive low pH conditions of the stomach and exposure to bile. This gut survival  has been demonstrated in vivo in humans.  High levels of propionibacteria has been detected in feces which provides further proof that it can survive gastrointestinal transit.  Once consumption of the dairy propionibacteria ceased, levels in the feces declined.

And Here’s just a quick run down of what other clinical studies show it does.

Ohhhh and check this out…

ability to bind to heavy metals

In addition to its widespread consumption from Emmental cheese, Propionibacterium freudenreichii has received the “Generally Recognised As Safe” (GRAS) status and has been granted “Qualified presumption of safety” (QPS) status from the European food safety authority.

Lastly, there are no indication of side effects from consuming this product in any of the human trials.

You simply add water to it and bam, you are done….

This is literally… the best B12 product in the world!

Here is product number two, which has never been seen before on the market, and has equal importance in helping heal me from my disease…

We have all heard of probiotics and probiotics, but truly, the most crucial of them all is Postbiotics.  Maybe you’ve heard about it once, but it’s not been available until NOW….

There is prebiotics and probiotics and the sole purpose of these things are to create postbiotics in the human body.  We have bypassed both the prebiotic and probiotic steps and bring you Postbiotics directly…. Which are much more gentle and better for you…. As you skip all of the conversions, which makes you gaseous and bloated from the carbon dioxide conversions.

One of the most promising things about using postbiotics in place of probiotics is due to how postbiotics mimic the beneficial and therapeutic effects of probiotics while avoiding the risk of administering live microorganisms to patients who cannot tolerate them, such as those with immature intestinal barriers or impaired immune defenses.

There is current research being done on infants to see if this can help in a gentle way. Recent advances in the comprehension of the postbiotic biological effects and related mechanisms, indicate that postbiotics may be a promising effective preventive strategy against necrotizing enterocolitis while avoiding the risk of administering live microorganisms to preterm infants that could translocate and cause infection.  So they are suggesting that it’s Well-Tolerated by Those with Suppressed Immune Systems (Including Infants)

so… these Studies have found that probiotics are effective in decreasing necrotizing enterocolitis (NEC), which is this serious health condition that is one of the leading causes of complications and death in preterm infants. NEC is characterized by intestinal injury and inflammation. It develops in about one out of 10 preterm infants and is considered a medical emergency.

While probiotics are currently considered “the most promising therapy on the horizon for this devastating disease,” researchers are now turning to  postbiotics as potential alternatives or adjunctive therapies to probiotics. Probiotic and postbiotic bacteria are essential for infants digestion, absorption, storage of nutrients, development and immunity (just like they are in adults). Some infants cannot tolerate supplementing with live microorganisms (probiotic bacteria) but may respond well to postbiotics.

A 2014 report published in Clinics in Perinatology explains: “The infant/host provides a hospitable, temperature-stable, nutrient-rich environment for bacteria while receiving, in return, benefits from the commensal bacteria.” (12) Postbiotics may help the infant’s intestine protect itself from bacterial pathogens that cause inflammation, encourage the growth of beneficial bacteria, control epithelial immune responses and maintain intestinal homeostasis.

Additionally, there’s some evidence that probiotic bacteria that are killed due to heat in the gastrointestinal tract may function as postbiotics. These microorganisms seem to retain their structure and continue to have beneficial effects on the host, such as accelerating intestinal barrier maturation and healing. (8). (Point to myself and shake my head up and down with one eye closed)

Postbiotics may Reduce the Presence of Harmful Pathogens, which the hospitals KEPT wanting to test me for. ugh…

Some of the pathogens that postbiotics may be capable of diminishing include listeria monocytogenes, clostridium perfringens, salmonella enterica, and escherichia coli. , which they keep testing me for ugh…

Studies have found that probiotic bacteria, including lactobacillus casei DG (LC-DG), produce beneficial postbiotic byproducts that together help modulate inflammatory/immune responses. (9) In studies. postbiotics — such as the fatty acids called acetate, butyrate and propionate — have been linked to inflammatory suppression, reduced generation of reactive oxygen species and regulation of apoptosis.

Due to their ability to decrease inflammation, such as after someone has recovered from an illness or infection, probiotics and postbiotics together can be helpful for treating symptoms of IBS and IBD, in addition to many other inflammatory conditions. Some research even shows that  in certain cases when probiotics are not helpful or necessarily safe to give to patients with inflamed GI tissue, “Postbiotics may be a safe alternative for the treatment of patients with IBD in the acute inflammatory phase.” (10)

Ok, now check this out!  Do you have diabetes or high blood sugar??!

A recent study done at McMaster University in Canada found that use of postbiotics is associated with reductions in blood sugar levels in obese individuals who have prediabetes. Postbiotics seem to have anti-diabetic effects because they improve the body’s use of insulin. (11) Research suggests that postbiotics’ mechanisms of action include reducing fat inflammation and decreasing liver insulin resistance.

Mice that were injected with the type of postbiotic called muramyl dipeptide experienced reduced adipose (fat) inflammation and reduced glucose intolerance even (smile as speaking in disbelief with small laugh in voice) without losing any weight. Based on the study findings, certain postbiotics are therefore considered to be “insulin sensitizers” with various protective effects in obese or diabetic patients.

Different types of postbiotics include:

1. Short Chain Fatty Acids, such as Acetate, Butyrate, and Propionate, which are normally produced by fermenting undigested carbohydrates in the intestines.  You bypass all that bloating and gas…

2. More types of Postbiotics include:

Lipopolysacharides, which is a complex molecule containing both lipid and polysaccharide parts, including Polysacharride A and exopolysacharide, so you are getting benefits similar to taking Reishi mushroom.

3. More types of postbiotics include:

Indole derived from Tryptophan – we all know about Tryptophan….  It’s an amino acid that you body uses and turns the tryptophan into a B vitamin called niacin.  Niacin plays a key role in creating serotonin, a neurotransmitter that’s associated with sleep and melatonin levels.  Kind of like a feel-good kind of thing…. The tryptamine skeleton is part of the vast majority of indole alkaloids.  For Example, N-Dimethyltryptamine (DMT), and psilocybin from psychedelic mushrooms are the simplest derivatives of tryptamine.

More types of postbiotics include:

5. Lactocepin – where it shows in a clinical the intestinal microbiota has been linked to inflammatory bowel disease (IBD), and oral treatment with specific bacteria can ameliorate IBD (reverse it).  And at the end of this clinical study it says…. Thus, Lactocepin-based therapies may be effective treatments for chemokine-mediated diseases like IBD.

6. The P40 molecule, which people have spent thousands of dollars for a 30 day supply in order to make their telomeres longer for longevity.

And the third product…

Remember all that stuff I talked about how the b12 probiotic enables other probiotics to grow and work more effectively.  This 3rd product is a probiotic formulation to go in conjunction with the B12 probiotic, which will enhance the growth rate and effectiveness of the probiotics in this formulation by 10-Fold plus.  It’s my Probiotic Synergy Blend.

There is a forth product, but that is going to take me a month or so to formulate…

It’s these three products plus the fourth one coming next month, with the strong desire to get better, which saved my life…

I highly recommend everyone, to try all three of these products and see what it does for you.  I’m extremely confident that over the next months that I’ll be getting incredible amounts of testimonials from customers on what it has done for you.

As usual, I offer new items ‘At-Cost’ for everyone to try.